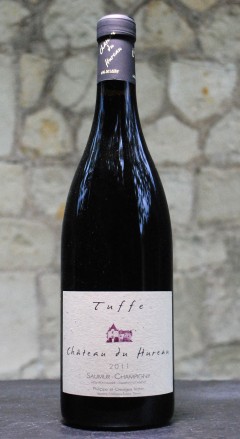 Our “Tuffe” cuvée, previously known as “Grande Cuvée” is the largest one: 80 to 100,000 bottles/year, depending on the vintage.
Coming from 15 parcels of old and young Cabernet Franc vines, Tuffe is a blend from different “terroirs”, scattered around Saumur and Dampierre/Loire. Here the common denominator is the tuffeau (around Saumur, we would say “la Tuffe”), which can be found at anything from 1 foot to a couple of yards underneath the surface.
Differences in soils, exposition, age of the vines: this patchwork is the real nature of the Saumur-Champigny appellation, and we want “Tuffe” to be an example of the charm of our appellation.
From a serious basis of really ripe Cabernet Franc grapes, this is a really serious wine… But which doesn’t take itself too seriously! Its delightful lack of pretention that will please one and all!